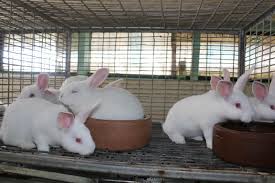 Rabbit farming may have enjoyed a greater interest from potential entrepreneurs around the world in recent years, but it has long been identified as a potential food producing industry for third world countries. In fact, since as early as 1978, governments and world food organizations have been promoting rabbit farming in Africa, Asia, and South America. Here are five reasons why:

The average sheep, cattle, or pig farm, on a commercial level, requires hundreds of square miles of grazing, in order to produce sufficient animals to be profitable and sustainable. The average commercial rabbit production farm can be started on a piece of land as small as an acre, and requires little more than a few equipped sheds in terms of space.

Livestock farming is well outside of the potential price range of any small entrepreneur, and most livestock farms cost millions of dollars to start and run. The average rabbit farm can be started with a few thousand dollars, and is likely to become profitable in the first year.

While traditional livestock herds take years or even decades to grow, a commercial rabbitry can be fully stocked with hundreds of rabbits within a few months. In fact, while sheep and cattle have five and nine month gestation periods respectively, and produce one to three offspring, a single rabbit breeding doe can produce as many as 800 children, grandchildren and great grandchildren in one year. That means that with only a few breeding rabbits as stock, a rabbit farmer can go from micro enterprise to large-scale concern in a single breeding season.

There is a good reason that the keeping of livestock in urban areas is limited by legislation. Diseases like swine flu, bird flu, and mad cow disease easily cross the species barrier, and infect humans. Since there are very few, if any, diseases that can be passed from rabbits to humans, it is safe to keep a well-maintained rabbitry even in an urban area. All they need is an appropriate rabbit feed and a safe environment.
Post Views: 4,622
Pages: 1 2